Currently doing:
Playing something on Steam
[ NEWS 15.10.2012 20:59:09 Still working on my RPG Maker game ]
15.10.2012 20:59:09 Still working on my RPG Maker game
Just wanted to say that my girlfriend and me are still working on our game.
It's just that we do not have that much time right now to work on. We started working on the game with RPG Maker VX but when VX Ace came out we thought about switchting to the newer version because it has some neat features (most important of all that you can use multiple tilesets without having to rely on SwapXT). So far we haven't bought it yet because we want to reach a point until we can say that the player managed to do something. Well, this will probably be the first major boss in the game. We're almost there but some parts are still missing. After that we'll import our project to VX Ace. Except for the scripts it should be possible to import most of the stuff. We'll have to look for new scripts then, but there are already lots of them available. But I'll have to at least edit my own scripts and make them compatible to RGSS3. For example my Weapon upgrade script. This picture shows the first village you'll start the game in. Looks nice, eh? Well... except for the dead people and the burning houses. :) 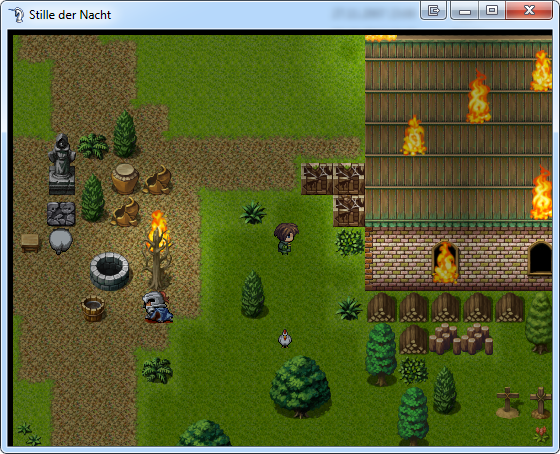 I started playing and making RPG Maker games when RPG Maker 2000 came out. I worked a lot on my own first game, but then... I downloaded a game from a friend and unzipped it. Unfortunately I didn't realize where I unzipped it... It was my own game's folder. And then I zipped everything a couple of days later. That was my backup as well... I stopped working on my game... and didn't play that many game either anymore. That seriously turned me down. But for whatever reason I stumnled upon RPG Maker VX together with my girl-friend last September when we were on holidays in France. And then we decided to work on a game as a prequel to a forum-RPG we're playing.
Interested? Well... Make Your Own Game. :)